See previous posts – Switch on Anti-Depression Today and So Long and Thanks for all the Serotonin.

In response to the recent BMJ editorial on Serotonin and Depression, there were seventeen letters of which three were published, along with my response. These are copied below along with the best letter – by Barney Carroll – which wasn’t published. Make your own mind up as to why.

Another piece of minor intrigue is that this editorial, originally entitled So Long and Thanks for all the Serotonin, a title BMJ felt uncomfortable with, registered well on Altmetric – an index that tracks how much Buzz an article is generating. When I started looking at this, the article was rated at 43 on Altmetric and then moved down to 40 passing through 42 en route. It will presumably pass back through 42 at some point as it gets displaced by Buzzier pieces. Amusing given the Hitch-Hiker link. 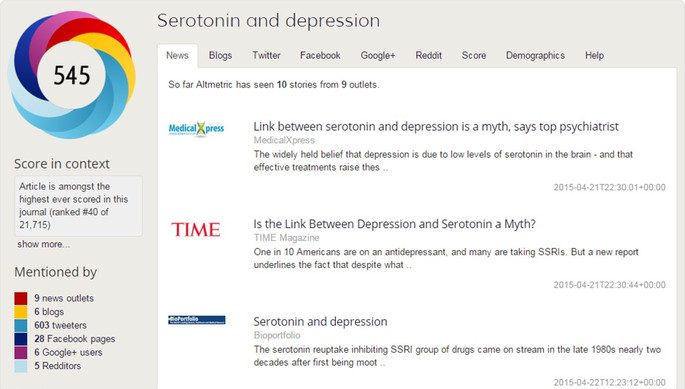 As a matter of clinical science, the notion of a simple serotonin deficiency in depression ended 45 years ago, when the proposed therapeutic utility of monoamine neurotransmitter precursors was disconfirmed.1 There has been little incisive progress since then, owing to major missteps in the intervening years – for starters, the foolish introduction of generic major depression in lieu of clinically differentiated types of depression as the focus of investigations;2 the displacement of disinterested clinical science by corporate experimercials;3 the corruption of journals and of educational forums by key opinion leaders who promoted corporate marketing narratives;4 and the capture of research funding agencies and regulatory agencies by commercial forces. The discomfort that David Healy’s editorial has caused in some quarters reflects a general embarrassment at the emptiness of current research in mood disorders. The yield has not been commensurate with the billions of dollars thrown at the problem – to the point where most corporations have exited the field out of a healthy self-interest. Little wonder, then, that those who have reason to be embarrassed are now throwing the book at Dr. Healy for stating the obvious.

Serotonin and depression – Healy does a disservice to psychiatrists

David Healy does a great disservice to jobbing psychiatrists with this editorial. By portraying them as ‘co-opted into a myth’ about low levels of serotonin being the sole cause of depression he paints them as gullible, and by stating that the same theory is ‘an easy shorthand for communication with patients’ he paints us as lazy and reductionist in our appraisal of the complex and diverse causes of depression.

In reality, good psychiatrists are and always have been only too ready to admit that they are unsure how antidepressants work. Serotonin does play an important role – likely via factors like neurogenesis and gene expression downstream from synapses – but modern psychiatry is way ahead of where Healy seems to think it is. The picture is far more complex. The fact that ketamine has been shown to be useful in depression does not ‘cast doubt on the link between serotonin and depression’, it rather confirms that the neurobiological underpinnings are as multifaceted as we think.

In any case, whatever their mode of action, SSRIs do work. Even the most stringent of analyses (i.e. Kirsch) support this. There is no good evidence that SSRIs work any less well than TCAs for depression , and the SSRIs have not become so commonplace in clinical practice due to some form of pharma-doctor conspiracy, as Healy would suggest, but because the older TCAs have a far less admirable side-effect profile and were also lethal in overdose. The safety of our patients should always come first, and they are far less safe without treatment for their depression.

Serotonin and depression: myth or legend?

David Healy’s observations on serotonin and depression make interesting , if familiar, reading [1]. However, I was struck by the remarkable claim that the focus on serotonin has led to the ‘eclipse of cortisol’ in mood disorder research. A quick search in Scopus with ‘cortisol’ and ‘depression’ revealed a rapidly increasing number of published articles from the late 1990s, continuing unabated to the present time. Only last year saw the completion in the UK of a large placebo-controlled study which examined the effects of inhibiting cortisol synthesis in patients with depression refractory to SSRIs[2]. David also manages to suggest that ketamine has been shown superior to SSRIs in melancholic depression whereas no such comparison has been carried out. He further implies that the work of Andrews and colleagues is based on the intellectually paralysing notion that low serotonin causes depression whereas in fact these authors argue exactly the opposite [3].

Should one confront myths by constructing different ones? As an avid BMJ reader I find myself increasingly confused by this question. For if scientific narratives are manifestations of competing power claims and vested interests perhaps there isn’t really a ‘fact of the matter’- the important thing is to be on the right side. I agree with David.

One factor reducing the effectiveness of antidepressants treatment is our inability to personalize pharmacotherapy, i.e., clinicians have no mechanism for predicting whether a particular patient will respond to a specific antidepressant. Instead, the process of matching patients and treatments requires a prolonged period of trial and error, delaying clinical improvement and increasing the risks and costs associated with treatment. Despite important progress in trying to identify depressed patients at high risk of treatment resistance [2], Psychiatry continues to lag behind other specialties like Cardiology and Oncology in which personalized treatment selection is far better established [3,4].

Developing more generally effective treatments and more rapidly effective treatments would be extremely important advances for public health.  However, in the absence of any such silver bullet, we advocate the development and implementation of innovative statistical methods to get the best available drug to each patient, as an interim solution. Personalized pharmacotherapy may still enable us to “save lives and restore function”. Giving up on these patients is not an option.

A pleasing look of truth

I wrote an almost identical editorial as this in 1991 (1). Covering the marketing of serotonin in 1997 (2), I cited Jerome Gaub’s 1767 opinion of Leibniz’ views on the relations of the mind to the body – it is a “fable whose novelty has recommended it, whose recommendation has spread it, whose spread has polished it, refined and adorned it with.. a pleasing look of truth” (3)

I use SSRIs.  Nevertheless I believe the SSRI era will soon stand as one of the most shameful in the history of medicine.  The shame does not stem from what pharmaceutical companies have done, which is just as might have been expected.  The shame will be seen to have arisen from the failure of doctors to know as much as they should have done about medicines they dish out so liberally.  A recent study showing how a dollop of neuroscience dressing can disguise otherwise meaningless material should be compulsory reading for doctors who are after all the true consumers of these drugs (4).

But perhaps an even greater shame will be seen to lie with the fact that this has been an era in which the bulk of publications on on-patent drugs in our best journals were ghostwritten, an era in which the journals refused to demand access to trial data as the price of publication – nowhere more clearly demonstrated than in the area of antidepressant studies on children.  It has been an era when industry has controlled journals, by spending money on some of them and by intimidating others into self-control.

Meanwhile the patient information leaflets for pretty well all antidepressants and wannabe antidepressants like quetiapine as of today continue to promote versions of the Low Serotonin Hypothesis (thanks to Julie P for pointing this out). This should incense a lot of people.